A few years ago I was speaking with a college basketball player who had to sit out an entire season because he had transferred from one school to another.  I asked him if it had been a long year.  He smiled grimly and said, "You have no idea."  At that point he was right, I had no comparable experience, but now, thanks to the pandemic, I fully understand his frustration.  I later found out that this player went over 600 days between college basketball games.  The Neshanock didn't quite reach that level of abstinence from the game we love, but at 565 days since our last match, it's been more than a little while since we've been in uniform, on the field, together.  Among other things that meant some of us spent the last few days trying to remember where we put essential items like our uniforms, or in my case the scorebook, almost two years ago.   There were also a few reports of uniforms no longer fitting which, of course, can only be attributable to the material shrinking over what has been an interminable off season plus. 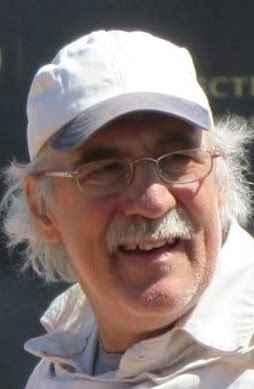 Fortunately, however, the weather cooperated yesterday to allow the Neshanock to make up a rained out game with the Elizabeth Resolutes at their home field in Rahway River Park, Rahway, New Jersey.  The Resolutes are, of course, our state's senior vintage base ball club and this was the renewal of the longest vintage base ball rivalry in New Jersey.  Played under 1870 rules, Flemington broke quickly from the gate, scoring three times in top of the first, keyed by hits off the bats of Danny "Lefty" Gallagher and Dan "Sledge" Hammer.  Elizabeth got one back in the bottom of the inning and after the Neshanock added a run in the top of the second, the Resolutes tallied three times to tie the game at 4-4 after two innings.  After that, however, Flemington got hot on offense while able to hold Resolutes more or less at bay.  The Neshanock added 10 runs over the next four innings while limiting Elizabeth to four so that the Neshanock led 14-8 after six innings. 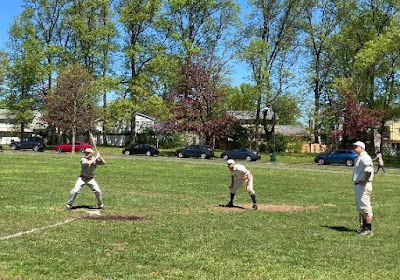 While it is almost axiomatic that no lead is safe in vintage base ball, that's especially true of games played under 1870 rules primarily because the defense can't take advantage of the fair bound out of the 1864 rules.  Although the Neshanock don't play 1870 rules base ball very often, we've learned that to win it's essential to keep scoring.  Unfortunately, for Flemington, understanding and doing are two different things and the Neshanock managed only four more runs over the next five innings.  The lack of offensive production, however, wasn't  due to a lack of effort, but more because the Resolutes tightened up their defense, especially on those "routine" plays that so often mean the difference between winning and losing.  Elizabeth also got its offense going and finally tied the game in the bottom of the eighth at 16-16.  Although the Neshanock got two on in the top of the ninth, they were turned away without scoring.  Two well placed hits by the Resolutes in the bottom of the inning gave Elizabeth a hard earned 17-16 win.

In the loss, the Neshanock offense was led by "Lefty" who had five hits, including two doubles while recording the Neshanock's first clear score of the season.  "Sledge", Rene "Mango" Marrero and Chris "Low Ball" Lowry contributed three hits apiece followed by Joe "Mick" Murray, Dave "Illinois" Harris and "Jersey" Jim Nunn with two each.  On the pitching side, Bobby "Melky" Ritter recorded five strikeouts, a high number for a vintage game.  While the loss was disappointing, just being in uniform, on the field, made everyone feel they had won something.  Next Saturday, the Neshanock will be back in action at the Longstreet Farm in Holmdel against the home standing Monmouth Furnace Club. 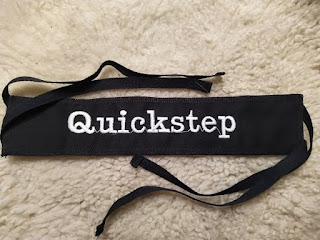 As enjoyable as Saturday was, however, it was clear something was missing - the presence of Paul Salomone, founder and long time captain of the Resolutes who died on November 11, 2020.  While the early history of base ball may be shrouded in myth and legend, that's not true of vintage base ball, we know far more about the who, what and when.  Paul Salomone was a pioneer in getting vintage base ball started in New Jersey.  Not only did Paul found and sustain the Resolutes for over more than 20 years, he encouraged his players to branch out and form teams of their own.  That's how the Flemington Neshanock and, more recently, the New Brunswick Liberty got started.  Paul was both passionate and intense about what he always called "this project" which sometimes led to challenging moments.  But underneath it all was his belief that by making historical accuracy the highest priority, vintage base ball could teach participants and spectators how organized base ball was played in its early days.  It's a very worthy objective and the best way for us in the vintage base ball world to honor Paul's memory is to continue what was truly his "project."