Schedule Making - Now and Then

The vintage base ball community spends a great deal of time trying to understand how the game was played on the field in the nineteenth century so that we can do the best job possible of recreating it today.  Understandably, little, if any, attention, is paid to how things worked off the field especially during the off-season when very little happened.  Things were so quiet base ball wise in December of 1860 that the Warren Club of Roxbury, Massachusetts re-organized itself into a literary and debating society for the winter.  It's an experience few vintage clubs including the Neshanock are likely to recreate.  The nature of off season base ball in the 19th century came to mind because among the additional responsibilities I've taken on with the Neshanock is at least one off-season job - putting together the 2020 schedule.   It's a process that I thought wouldn't start until late 2019 or even early 2020, but it actually began back in September and to my surprise, Flemington's schedule is very close to being finished. 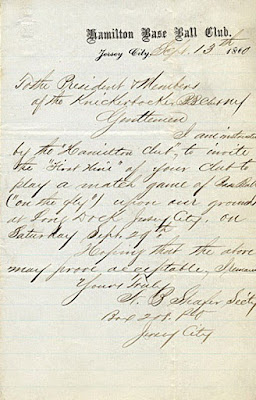 1860 challenge from the Hamilton Club of Jersey City to the KBBC of New York, it does not appear the match was ever played


Not only did the process begin earlier than I would have thought, the schedule has also come together with very little difficulty.  A large part of that is due to the number of vintage clubs in New Jersey which facilitates scheduling matches within the state.  Thanks again, then to the Elizabeth Resolutes, the Hoboken Nine, Monmouth Furnance and the New Brunswick Liberty, all of whom Flemington will play at least once.  Included in the schedule are visits to historic New Jersey sites such as Allaire State Park, Ringwood Manor, Howell Living History Farm and New Bridge Landing, just to name a few.  The Neshanock will also make two overnight road trips beginning with our participation in the Nineteenth Century Base Ball Festival at Gettysburg so ably sponsored by the Elkton Eclipse.  In addition, we are also glad to return to the National Silver Ball Tournament at Genesee Country Village near Rochester, New York for the first time since 2016.  With still a few dates to be pinned down, it looks like Flemington will have matches three out of every four weekends from April through early October which feels like the right balance of open dates and playing on a regular basis.  The full schedule will be available at the team web site (www.neshanock.org) by early January. 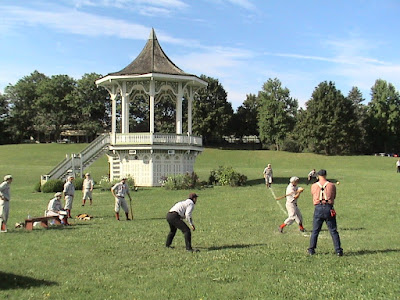 As is often the case, working on the 2020 schedule led me think about how it was done back in the nineteenth century which in this case bore no resemblance to today.  While I haven't done any in depth research, I'm fairly confident that little schedule making was done during the off-season and that it was a much more cumbersome process.  Instead of exchanging emails, nineteenth century clubs waited until the spring and then used challenges sent or received through the mail.  The details of the process, or lack thereof, for one New Jersey club survive in the minute book of the Hamilton Club of Jersey City.  While the by-laws of the Hamilton Club go into great detail about many aspects of club life, they are silent on match games.  As a result, the full membership made all of the decisions to make or accept challenges.  Unfortunately, the Hamiltons were a contentious lot who sometimes couldn't agree on a motion to adjourn.  In May of 1859, for example, a tie vote on challenging the Brooklyn Club had to be broken by the president's vote.  A few weeks later, the club voted to challenge their counterparts, the Hamilton Club of Brooklyn, but then just two days after that had second thoughts and tried to withdraw the challenge.  It's no wonder the Hamilton Club didn't play very many matches. 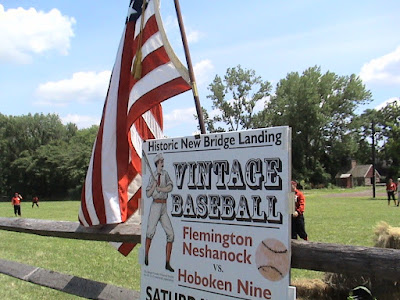 As base ball became more competitive in the post Civil War years, schedule making became more organized, but there were still more than a few difficulties including not just the date of a match, but sometimes the venue.  In 1870, the Amateur Club of Newark and the Elizabeth Resolutes were competing for the unofficial New Jersey state championship.  Each team had won a game so the third and deciding match had to be played at a neutral site which led to no end of debate.  The Amateurs first proposed the grounds of the Champion Club of Jersey City, but the Resolutes refused and offered the Irvington Club’s field as an alternative.  Wisely, the Amateurs rejected the proposal because the familiarity of some of the Resolute players with the unusual layout of the Irvington field made it far from a neutral site.  After that ploy failed, the Resolutes next proposed the cricket ground in Hudson City (now part of Jersey City).

Instead of responding in writing, the Amateur Club sent a committee to Elizabeth to inform the Resolutes the site was acceptable and the game should be played the very next day.  Whether it was because of the short time frame or some other reason, the Resolutes told the committee they had changed their minds and were no longer willing to play in Hudson City.  After further discussion, the committee and the Resolutes agreed to play the game at Elizabeth, but the Amateur Club’s board rejected the agreement, claiming the committee had exceeded its authority.  Instead, the Amateurs offered to have the game at the Waverly Fairgrounds located between the two cities, but once again the Resolutes refused.  Perhaps realizing they were out of alternatives, the two clubs finally agreed to play at Waverly where the Resolutes won a decisive 28-17 victory.  Not long before the game was played, the New Jersey State Base Ball Association considered establishing rules for a more official championship, but decided against it, doubtless to some extent because of the Amateur-Resolutes debate.   Fortunately, schedule making is far easier today!