Ninety years ago this very evening "as the shadows began to cover the bleak facades of old mansions on Brooklyn Heights," a group of men, mostly of mature years, began wending their way to the Brooklyn Club at 131 Remsen Street.  Once inside, they headed downstairs to a room, lovingly referred to as the "Coal Hole," a name borrowed or appropriated from a famous London pub.  They gathered to celebrate a birthday, but it was an unusual kind of birthday party.  Instead of the more traditional approach of friends throwing a party for someone, in this case all of the expenses had already been taken care of by the honoree.  And not just for this one time, but for as long as any of them should live.  Even more unusual, however, was the absence of the honoree himself, one Charles Ebbets, unavailable because of his death over four years ago.  Ebbets was not, however, about to let the small matter like his death get in the way of his friends enjoying an evening of food and fellowship on his birthday.

Founded in 1865, the Brooklyn Club, made up of the Borough's "wealthiest and most influential men," was for many years one of the Dodgers owner's favorite gathering places.  Supposedly his cronies began to "saunter in" to the club around 3:00 and make idle conversation until Ebbets arrived from the ballpark that bore his name.  Then "the conversation would take a serious turn" to the Dodgers and Ebbets would discuss the day's game, the team and the problems and challenges that faced him as club owner.  As the years went by "through a blue-gray haze of tobacco they looked [back into the past] at the team they used to know and watch . . . and somewhere in the outfield of memory, Wheat and Myers and Stengel [still] patrolled their grassy posts."  So close was the group that eventually it became the custom for them to gather on October 29th for a dinner to celebrate the Brooklyn owner's birthday. 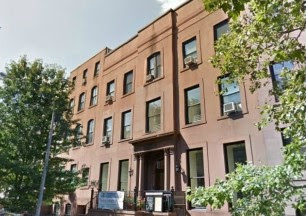 It's probably no surprise that there is more than one explanation of why the dinners continued after Ebbets death on April 18, 1925, but it is somewhat unusual that the same person gave two different explanations a year apart.  Judge Joseph Aspinall, one of Ebbets longtime friends, was one of three trustees in charge of the annual event.  In 1934, the Judge told the New York Herald Tribune that at one birthday dinner, Ebbets served cheap liquor, leading to queries of why he was "such a tightwad."  Ebbets not only denied the charge, but promised he would continue to pay for the dinner even after his death.  A year later, however, Aspinall told the Brooklyn Daily Times that about 1920 Ebbets told the group "he would like us to dine on his natal day after he died."  Regardless of the explanation, Ebbets didn't forget his promise, leaving $5,000 in a trust with the income at 5 1/2% to pay for the annual dinners as long as any member of the group was still alive.  Ebbets' estate was more than a little complicated with his 50% interest in the Dodgers divided into 15 parts for the benefit of about 25 heirs so remembering that promise was clearly important to him.  The story of the estate is reminiscent of the court case in Bleak House, but in 1927, Ebbets widow asked that the $5,000 be released and for many years it was the only part of the estate to be finalized. 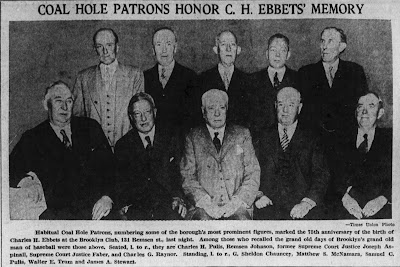 It apparently took a while to get the first dinner organized, but on October 29, 1929, 25 members of the original group gathered around a "candlelit" table for the initial event.  Ebbets left the details of the affair to Aspinall and the other two trustees of the fund.  Typically a vacant chair was left for the Brooklyn owner and before the first course there was "a silent toast to the departed" while the glass at Ebbets' place remained untouched.  Formal speeches were not on the agenda, but anyone could speak which as a rule "consisted primarily of fond reminiscences" in an atmosphere that was "gay with laughter."  No menus seem to survived, but in 1936, the Brooklyn Daily Eagle reported that "the best was none too good" from "diamond back terrapin to champagne."  The dinners were to continue until the  last member died with the funds then to go to the Brooklyn club.  It's not clear when the final dinner took place, the last media account was in 1942 when a dozen remained.  Perhaps the final dinner got lost in concern about World War II. 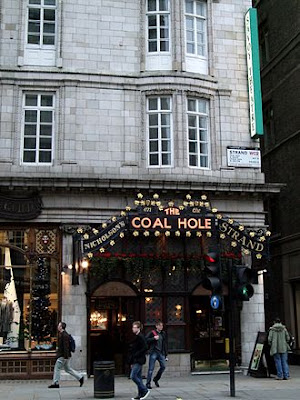 One feature of every dinner was a toast to Ebbets where members "spoke well of his loyalty and generosity."  The Dodgers owner was far from perfect, but while his "generosity" or cheapness has been debated ever since, there is no questioning his loyalty.  Certainly to his friends, but also to his ball club and above all to Brooklyn his adopted hometown.  The team, the ballpark that bore his name, the dinner and the Brooklyn Club itself are no more, but almost a century later, it's still appropriate on this day, the 160th anniversary of his birth to say, along with all those shades from the past - "Here's to Charlie!"
Posted by John Z at 12:53 PM