"The Most Thrilling Ball Game Ever Staged in Brooklyn"

Exactly 100 years ago today, the Brooklyn Dodgers were in first place, although only by a single percentage point.  By this point in the season there was no question the Dodgers were a legitimate pennant contender, but it was less clear whether pennant fever had taken hold in Brooklyn.  Only about 6,000 fans passed through the turnstiles at Ebbets Field for that day's game with sixth place St. Louis, attendance painfully reminiscent of the small crowds during the dramatic 1916 pennant race.  Perhaps it was because it was a weekday or possibly the attraction of two upcoming doubleheaders kept the crowd down.  No matter how low the actual attendance, however, this was a game where the number of people claiming to have attended would dwarf those who were actually there.  Tom Rice of the Brooklyn Daily Eagle, who had seen plenty of exciting games in his time, called it "a game that will live for years in baseball history."  Even more exuberant was William Granger of the Brooklyn Citizen who gushed it was the "most thrilling ball game ever staged in Brooklyn."  Hyperbole, not doubt, but, as we shall see, it was not just an important contest in the pennant race, but an unforgettable game in its own right.

Brooklyn Citizen - September 11, 1920
After the Cardinals failed to score in the top of the first, the Dodgers faced St.Louis's Ferdinand Schupp.  Although Schupp was pitching for a second division club, he was 3-1 against Brooklyn thus far in 1920.  The Robins immediately threatened, however, putting two on with two out and Hi Myers at the plate.  The Brooklyn center fielder tripled, driving in two runs and scored himself a few minutes later on a passed ball.  St. Louis got one back in the top of the second on Rogers Hornsby's home run, but Rube Marquard was in control after that and led 3-1 going to the top of the seventh.  With one out, Cliff Heathcote tripled and scored on a ground out to shortstop Ivy Olson.  Still ahead by one run with two out and none on, Marquard made the fatal mistake of walking Schupp, the opposing pitcher. Joe Schultz followed with a single bringing up Cardinal first baseman, Jack Fournier.  After Marquard fell behind 2-0, Fournier correctly guessed fastball and the ball went "soaring over the right field wall" for a three run homer that Rice bitterly called "his first and last home run of the season" (Fournier hit three in 1920). 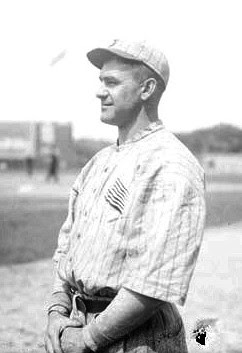 Fluke or not, the home run put Brooklyn behind 5-3 just when the Dodgers and their fans were counting on gaining a one-half game on the idle Reds and Giants.  Sherry Smith kept the visitors off the scoreboard the next two innings, but Brooklyn still trailed by two going to the bottom of the ninth.  The Dodgers got two men on, but with two outs they were down to their last chance and pitcher Smith due up.  Even though he had batted only 23 times all season, Ray Schmandt was Wilbert Robinson's unlikely selection to pinch hit.  So unexpected was the choice some fans supposedly called out "Who is that feller Robbie? (no numbers on the uniforms)." Schmandt fouled off at least seven pitches before making the most of his opportunity by hitting a sharp single to center, driving in a run and, more importantly, keeping the inning alive.  Brooklyn was still down a run, but Ivy Olson singled through shortstop, tying the game.  Overjoyed fans celebrated the dramatic comeback by throwing "perfectly good straw hats into the diamond by the dozen" and according to Rice, "the ex-wearers went home bare headed and proud of it." 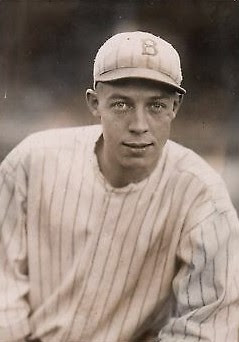 Ray Schmandt - Brooklyn's Unlikely Hero
No one was going home just yet however.  Neither team scored in the tenth, but after Jeff Pfeffer retired the first batter in the eleventh, the visitors loaded the bases on three hits that never got out of the infield.  Perhaps unsettled by his misfortune, the Brooklyn pitcher walked Mike Knode, forcing in a run that Rice said "looked like $1,000,000 by the town clock."   Any Dodger fan who thought things couldn't get any worse was proven wrong when Joe Schultz singled in two more runs giving the Cards a three run lead.  Nor was the inning over as there were runners on second and third with only one out.  Brooklyn's big weakness was supposedly its defense, but the Dodger fielders stepped up in a big way.  Fournier grounded to first base and Brooklyn's Ed Konetchy threw out Knode trying to score from third.  Schultz had moved up third on the play, but Dodger catcher Otto Miller took care of him a few minutes later, picking the unsuspecting runner off third. 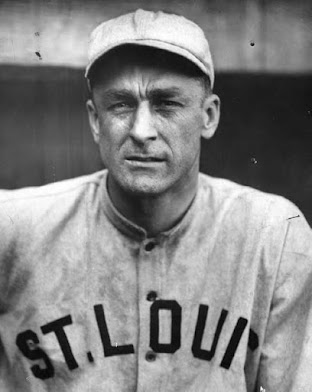 Long before he built Brooklyn's beloved "Boys of Summer," Branch Rickey was an unsuccessful field manager of St. Louis teams in both leagues
As gratifying (and necessary) as those plays were, the Dodgers again had their backs against the wall, this time needing three runs just to tie.  In the press section, Rice claimed St. Louis and New York sportswriters were already writing introductions to stories about a dramatic St. Louis victory. Brooklyn was far from done, however. Otto Miller opened the Dodgers ninth with a double, Pfeffer hit for himself and singled Miller to third.  Pfeffer was replaced by pinch runner Bill McCabe setting up the controversial play that seems to be almost obligatory in memorable games.  Olson grounded out to short and Miller scored, but as Olson passed Cardinal first baseman Fournier, the ball came loose allowing McCabe to go to third.  Both Robinson and Cardinal manager, Branch Rickey protested the play. The Dodger skipper claimed Olson was safe at first while Rickey argued that McCabe should be sent back to second because of interference by Olson.  Umpires Klem and Emslie conferred and reached a decision probably designed to equally please/displease both managers - Olson was out, but McCabe could stay at third.  He wasn't there long, however, as Jimmy Johnston drove him home with a sacrifice fly, but the Dodgers were still down a run with two out and no one on.

Brooklyn Eagle - September 11, 1920
The situation wasn't promising, but the Dodgers had already proven they wouldn't give up.  Bert Neis put the tying run on base by beating out an infield hit and Zach Wheat followed with "a wicked single" to right field.  Wheat's hit was so "wicked," it got past Joe Schultz and went all the way to the right field wall.  Neis scored easily and Wheat was on third with the winning run prompting another shower of straw hats from the fans.  Determined to prove he was indeed, the Dodgers "greatest individual asset," Hi Myers hit a grounder to deep short and charged down the first base line, "taking great risks of breaking his neck."  Hustling all the way, Myers "half sliding and half jumping," beat the throw to first, driving in Wheat with a run Tom Rice speculated/hoped "may bring a pennant to Brooklyn."  Fournier was so frustrated he threw the ball over the right field wall which probably went unnoticed by the fans pouring on to the field to congratulate their "Flatbush favorites." Whether it was the "most thrilling game ever staged in Brooklyn" was debatable, but no one in attendance would ever forget it.  More importantly, a tidal wave of pennant fever was about to engulf Brooklyn.
Posted by John Z at 12:27 PM