"Such a State of Perfection"

This past Saturday, the Elizabeth Resolutes and the Flemington Neshanock once again renewed New Jersey's oldest vintage baseball rivalry - a friendly and respectful competition, dating back over 20 years.  The game was played at the Howell Living History Farm, near Lambertville, for the fourth time since 2018, although this time on a different field.  Howell is a working farm and since last year's field is now used to graze cows, it seemed prudent, for what should be obvious reasons, to shift to another part of the farm.  While the old field was somewhat hampered by a tree in right field, the new location not only had one in left, but also others throughout the outfield.  As a result, the pre-game discussion of the ground rules took longer than it usually takes to play an inning.  Thanks to flexibility on both sides, however, all the details were worked out satisfactorily.  With those issues resolved, the Resolutes won the coin toss and opted to strike second, sending the Neshanock to the striker's line. 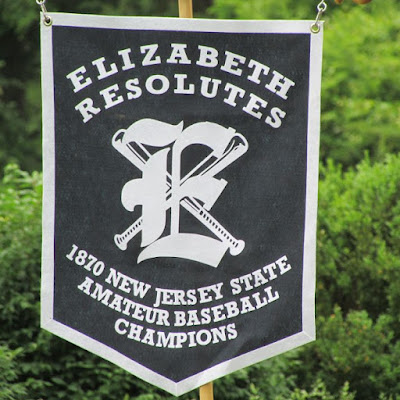 All pictures by Mark Granieri

Flemington got off quickly with two tallies in the first and four in the second, but Elizabeth more than kept pace and led 7-6 after two innings.  The Neshanock could only manage one run in the top of the third which was bad enough, but, in the bottom of the inning, Flemington muffs set the stage for four runs and an 11-7 Resolutes lead. The inning could have been worse for the Neshanock, but Flemington escaped a bases loaded jam when Ken "Tumbles" Mandel turned a double play in his own unique style. Scoring on both sides was limited after that. The Neshanock chipped away at the Elizabeth lead scoring at least once, but never more than twice, over the next five innings.  Flemington also tightened its defensive significantly allowing only three Resolute tallies including blanking Elizabeth from the sixth to the eighth.  This included another double play, this time by Joe "Mick" Murray, who made a fine catch of a bound out and then tagged a runner who had ventured too far off third. 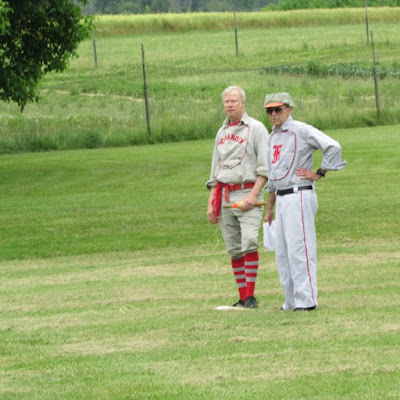 The net result of all this activity was a 14-13 Resolute lead as the Neshanock came to the striker's line in the ninth.  Although Flemington had scored at least one run in every prior inning, it was not to be and the Resolutes held on for a hard fought - well earned one run victory.  Much credit for the win goes to the Elizabeth defense which made only three muffs over the course of the game.  Flemington hit relatively well throughout, but stranded nine runners, any one of which would have at least tied the game.  The Flemington attack was led by Jeff "Duke" Schneider with four hits, followed by six other Neshanock strikers with two apiece.  Included in the two hit column were Chris "Sideshow" Nunn (while celebrating his birthday), Rene "Mango" Marrero, Mark "Gaslight" Granieri, Dave "Illinois" Harris, Jim "Jersey" Nunn and newcomer Ernie Albanesius.  We were glad to have Ernie with us and hope he will join us again.  Flemington also got solid pitching from "Illinois" and Bobby "Melky" Ritter. 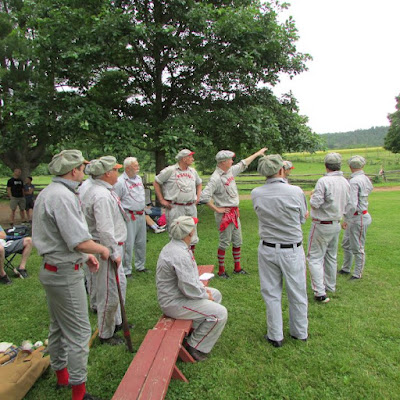 The Resolutes displayed a very handsome new banner, commemorating their 1870 New Jersey state championship.  That achievement as the best team in New Jersey is perhaps also symbolic of how the original Resolutes and Neshanock were part of different facets of baseball's early development.  Elizabeth competed at the highest level within the state and then, in 1873, joined the National Association, the country's first all professional league.  While they were unsuccessful at that level, the Resolutes were part of what ultimately became major league baseball.   Although the Neshanock were founded not long after the Resolutes, they took a different path, one which continues today albeit in a very different form.  This came to mind because Saturday's game was played in Lambertville, the home of the Logan Club, formed in 1865 about the same time as the Neshanock.  The two clubs played that same year and the Logan Club prevailed 28-10. It was a productive offensive day for the Lambertville team, but nothing compared to what happened the next two times the Neshanock and Logan clubs met. 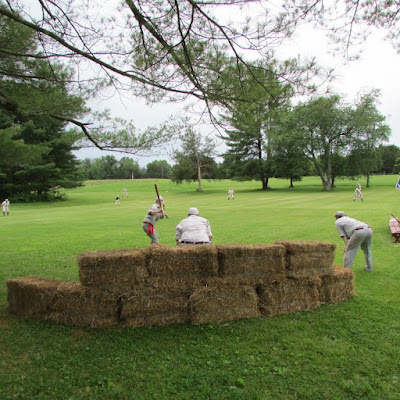 Game action with the troublesome tree in left field

When the two teams met again in 1866, the Logan Club trounced the Neshanock by a hard to believe 77-35 score.  The Flemington players, however, were no quitters and came back for more the following year.  They had apparently improved, at least relatively speaking, since they cut the margin of defeat from 42 runs to a mere 24, falling 71-47.  While scores like these were not totally unheard of at the time, it's difficult to understand how a team could score that many times. The most runs the modern Neshanock have ever tallied was 49 last year, breaking an earlier mark of 35.  Yet when the original Neshanock scored at that level, they still lost and by a lot. Nor was the margin due to the Logan Club being a top team.  Just about a week before the 1866 game, they lost to the Athletic Club of Philadelphia, 120-17 in a game, that, for some equally unfathomable reason, lasted 12 innings.  Unfortunately little statistical information survives that might give some explanation of these high scoring contests.  An article in the Hunterdon Republican, about the 1867 Neshanock - Logan game, did suggest the Neshanock defense, or a lack thereof, had a lot to do with the Lambertville Club's 71 runs. 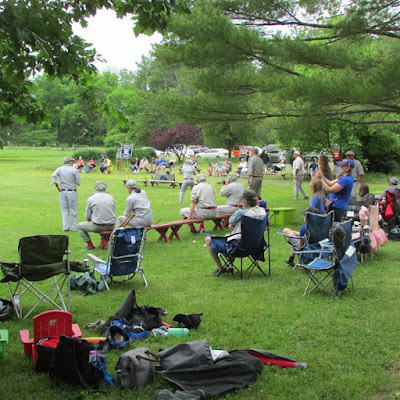 Neither the Logan Club or the original Neshanock had any lasting impact on baseball, but they were still an important part of the game's early development.  While there was plenty of baseball activity in New Jersey before the Civil War, the game didn't reach more rural areas like Hunterdon County until the postwar period.  Teams like the Logan and Neshanock Clubs were baseball pioneers in their communities and set the stage for the days when almost every town had a team competing against their neighbors.  Sadly, those teams and leagues have also gone by the wayside, but inter-community competition continues, indeed thrives, at the high school level. Early baseball clubs like those in Flemington and Lambertville are important because they were the first teams that people in small towns cared about. Perhaps the Hunterdon Republican reporter had this in mind when he hoped "the Neshanock will soon arrive at such a state of perfection" that they would be more competitive against their peers.  Even in those early days, the players and teams represented something beyond themselves.